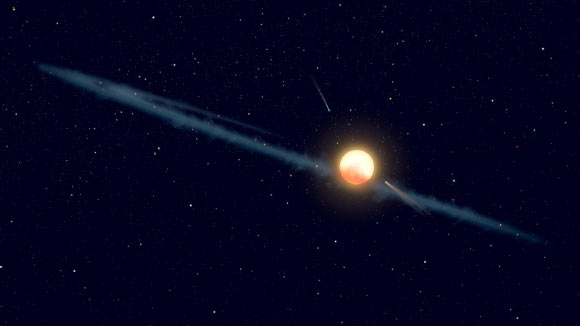 Back in 2016, Tabetha Boyajian gave a TED talk about a star with nifty little name KIC 8462852. The Kepler space telescope had studied it and lots of other stars over the course of four years, but this one stood out.

Also known as Tabby's Star, it is a main-sequence F-type star located in the constellation Cygnus, about 1,480 light-years from Earth. Its claim to fame of course, is that it was suggested that alien megastructures would explain the weird data that Kepler had recorded.

Alien megastructures? Yup, we're talking about a Dyson Sphere of some description, built by an alien civilisation to capture the energy from the star to satisfy their energy consumption requirements.

Dr Boyajian wasn't exactly happy with that idea, and felt they needed more data to determine what was actually going on. However, she did give a fun-filled lecture about it as I mentioned at the top of this article. You can watch that lecture here.

Anyway, after a Kickstarter campaign raised $100,000, they gained access to a ground-based telescope allowing them for the first time to watch the star in real-time.

The conclusion they are drawing is that large clouds of dust are the culprits.

Dr Boyajian said: “The new data shows that different colors of light are being blocked at different intensities. Therefore, whatever is passing between us and the star is not opaque, as would be expected from a planet or alien megastructure.”

“This latest research rules out alien megastructures, but it raises the plausibility of other phenomena being behind the dimming,” Dr. Wright said.

Other astronomers favour the idea that the star is naturally dimming on its own, rather than something transiting it.

While it's kind of sad it isn't a Dyson Sphere, it's also deeply satisfying that science actually works. There is still a lot more research to do on this enigmatic star before we can say conclusively what causes its strange phenomena, but after all, that's what make research so exciting, right?