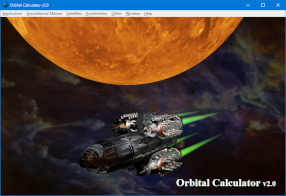 Four major new functions for acceleration and gravity and a few tweaks under the hood. New functions include: Constant Velocity, Free-Fall, N-Body Centre of Gravity (in 3D space) and Distance/Speed/Time.

These powerful functions allow you to calculate speed as a constant, as constant acceleration or as increasing acceleration, as well as determine the common centre of gravity of any number of astronomical or artificial space-born objects. Any number? Well, within limits, but they are large limits. A couple of potential bugs have been squished and I consumed vast amounts of coffee. Anything else you need to know? Oh yes, the details. Read on…

There is a relationship between distance, speed and time, such that if you know two of them, you can calculate the third - assuming the speed is a constant. It might seem trivial to include this calculation, but it has an ace up its sleeve: you can convert the results to various length over time units (e.g. mph to m/s or km/h etc.) In addition, velocity and distance can be entered in different units - for example, one in mph the other in km. This ability to rapidly and easily convert makes this function very useful.

I won't bore you with the mathematics, but there are 5 components to constant acceleration:

Knowing any three is sufficient to calculate the other two. In addition, like the Distance/Speed/Time function, this function can be used to convert from multiple length and time formats to another.

If you wanted to send a spacecraft to Mars at 1g of acceleration (to make it nice and comfortable for your crew and to negate the bone-decay and muscle atrophy), you could use this calculation to determine how fast the spacecraft would eventually be travelling and how long it would take to get to its destination.

Hint: you'd have to turn around half-way so you could decelerate.

Free-Fall is sort of like Distance/Speed/Time but the velocity is always changing. It's sort of like Constant Acceleration, except the rate of acceleration is not constant because now gravity is in the mix. The further the object falls, the closer to the gravitational mass it gets, and therefore gravity increases.

The Free-Fall calculation takes this into consideration. All you have to do is name the gravitational mass and the duration of the free-fall event, and it will calculate how far the object falls and what its final velocity is (prior to impact).

It ignores things such as air resistance and atmospheric buoyancy (which contribute to terminal velocity), because that requires detailed knowledge of the atmosphere*.

* This is usually negligible for starting elevations below half the height of the the Kármán line on Earth (the Kármán line is at 100km or 62 miles), but the free-fall time you specify might require the descent to begin well above that.

This allows you to enter any number of ad-hoc gravitational bodies and computes the location of their centre of mass. The bodies you enter are not selected from the database, rather you enter their masses and locations within the system you define. The masses can be entered in terms of Earth masses, Jupiter masses or Solar masses. The upper limit on the number of masses you can add is high enough you'll get significantly hungry before you reach it.

After entering the data, you can review individual items and remove them prior to running the calculation (or afterward and running the calculation again to see what changes). The on-screen data displays the location of the centre of gravity in x-y-z coordinates. The clipboard data displays all the data with masses converted to Earth masses and shown to three decimal places, and locations converted to kilometres and shown to two decimal places.

To make the output data easier to read, you can name each gravitational mass as you enter it.