blog:articles:software:orbital_calculator
« How Big Is The Universe?
Story Structure (Hero's Journey) »

I needed to calculate orbital characteristics for any orbit around any gravitational mass (because I write sci-fi stories), so I wrote this program because I'm a programmer and I'm too lazy to do it by hand all the time. The program has expanded over the last few years, sometimes from suggestions by other writers. I make it freely available and as simple to use as possible. It now has a list of functions as long as your arm (assuming you're not a tentacle user), and the number of downloads is now in triple digits.

I wrote Orbital Calculator to handle just about any proposition. You can add new gravitational masses (the things you want to orbit) for easy and consistent recall. You can add satellites too, so you can recall their orbital data at any time. You can create temporary calculations (not stored for later recall), and you can edit orbital parameters without changing the stored data, so you can play “what if…”.

Even better yet, you can export any data for satellites or gravitational masses – choosing exactly which ones to export – and share the files with other users, who can import them into their own databases.

It runs on Windows & Linux (32-bit and 64-bit versions available for both platforms), and there is an armv7l version too (can you say Raspberry Pi?).

Note: you can click on any of the images to display them full size

This lists the important notes on each new release, explaining what has changed and what's new.

See the Downloads page to download Orbital Calculator for various platforms. A full description of the product is available on the page.

If you want to jump straight to the download, there are links to it in the top-bar menu and at the bottom of this article, else you can jump to the Downloads pageplugin-autotooltip__default plugin-autotooltip_bigDownloads

A full description and a list of the features are available here. 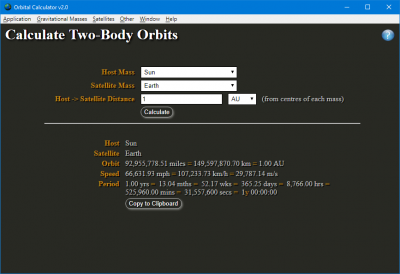 Users of the first versions of this program will be aware that the basic computation the program makes is for a satellite with an insignificant mass (vs the host gravitational mass). Simply select a mass and enter an orbital distance by typing in apogee and perigee (or just one for a circular orbit), then hit the calculate button. This is great for satellites and other types of spacecraft.

You can now also perform two-body calculations by selecting two gravitational masses and the distance between them. This will try and take into consideration a whole star-system full of planets by using the Solar system as a blueprint. It then compares this to the Newtonian/Kepplerian equation results and determines which is likely to be most accurate. This increases the precision in most cases.

Version 2 of the software makes many minor adjustments 'under the hood' to eliminate or reduce rounding errors and increase precision. This convenience is carried forward into the user-interface. Wherever it makes sense, for example, the Calculate button has been removed allowing the program to calculate (and recalculate) as you type. A Copy to Clipboard button has been added on most result screens for improved convenience.

There is now an embedded context-sensitive help system, with many of its pages filled with additional information. For example, there is an explanation of gravitic time-dilation - did you realise you are not experiencing time at 'full speed'? Gravity dilates time, and not just around super-massive black holes.

Gravitation and Motion has been enhanced

The Gravitation and Motion screen now calculates gravity, gravitational acceleration and escape velocity at the elevation you specify, as well as at the surface.

Wherever it is appropriate, you can now select AU (astronomical units) and meters as the unit of measure for both input and results.

The layout of all the screens have been redesigned to be easier to read and consistent. This makes using the program a much more pleasant experience.

Lagrange Points can now be copied to the clipboard

Calculating Lagrange points epitomises one of the simple yet effective enhancements littered throughout the program - the Copy to Clipboard button.

The clipboard data has been tidied too, so it now uses spaces instead of tabs to align the data, making it much more compatible with writing programs and note-keeping software.

The Lagrange points are usually calculated as the distance from the center of each of the two gravitational masses. In the real world though, you often want the distance from the surfaces of these bodies. For example, if you want to place a satellite at the Earth-Moon L4 Lagrange point, it is much more useful to know the location is 395,958 km from Earth and 400,597 km from the Moon. This also allows you to calculate the communications delay from the surface of one of these bodies and the satellite.

Enhanced, easier to use database maintenance

The database maintenance screens have been enhanced for much easier use. You no longer have to select which objects to display before entering the maintenance screen. Simply enter the screen and use the real-time filters to select which objects to display. Hovering over data in the 'Mass' and 'Surface Gravity' columns will reveal values in greater precision.

Wherever a value is less than (but not equal to) 0.00, youll see a ~ beside it to indicate this. Hovering over the value will, as stated above, reveal greater precision. For example, you can see the surface gravity of Betelgeuse is ~0.00. Hovering over it will display 0.0003.

An additional 11 new features have been added to the program, almost doubling its previous list of functions. Some of them are subtly embedded in pre-existing functions, so don't expect them all to have menu options of their own, but they all add up to make the software much more useful and easier to use.

One of these functions is the ability to enlarge the window contents by zooming in or out (without resizing the window). This is handy if you have issues reading the text at its natural resolution.

You are now able to control how frequently the program checks for updates - from every time the program is launched to no more than once per month. You can even disable update checking if you wish. This can be controlled on the new Preferences Screen, where you can also instruct the program to restore window sizes and positions and the zoom level.

Version 2 includes a new database format which brings several advantages. For example, 'repeat last calculation' now works even if you have deleted both the host mass and the satellite from the database.

A full description and a list of the features are available page (there's also a link to the page in the top-bar menu).

N.B. Windows and Linux versions are now available in both 32-bit and 64-bit flavours. I'll add a Mac version as soon as I can find someone to test it for me (feel free to volunteer!).