Trace: • The Bluffers Guide to the Quantum Universe

The Bluffers Guide to the Quantum Universe 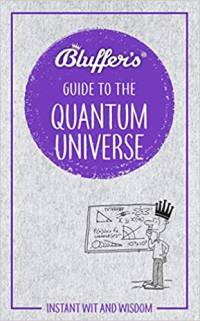 The Bluffers Guide to the Quantum Universe is a very funny guide (read: hilarious) to things surrounding quantum mechanics. Who the major players were, how the major theories won out over each other… or didn't. Tons of interesting facts you can toss around at parties and make it look like you know what you're talking about when discussing anything to do with quantum theory, quantum mechanics, who was who and who had breakfast with whom at which conference. It even reveals which Nobel winning physicist was Olivia Newton-John's grandfather (although I suppose you could just Google it now I've put the idea in your head).

All these facts are presented with a delectable sense of humour that'll be tickling your ribs from the inside.

Although it's all very tongue-in-cheek, the author - Jack Klaff - knows his stuff. He's probably best known to you as an actor, starring in Space: 1999, Star Wars, Red Dwarf (as Abraham Lincoln) and even a James Bond movie: For Your Eyes Only. As an academic he's held professorships at Princeton and Starlab.

His wit and sense of fun pervade such topics as entanglement, string theory and double-slit experiments, while demystifying bosons and leptons and so forth. Honestly, even if you've got no interest in the subject this will be a fun read, and it's only 118 pages (plus a who's who and a glossary of terms).