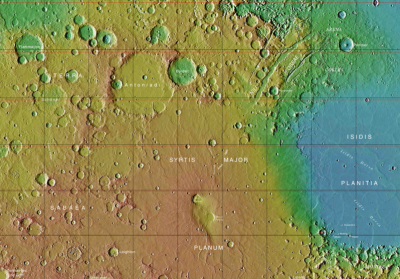 Mars Chart 13 (MC13), Syrtis Major, with Isidis Planitia (Isidis Basin) to the east. Jezero Crater is in the North-East of Syrtis Major, the North-West of Isidis, and has a large mountain on it's Eastern crater wall.

The Perseverance Rover, M20, is navigating its way around Jezero Crater, which is located on the flanks of Syrtis Major and to the North-West of the Isidis Basin. Jezero is easily identified the large mountain on it's Eastern crater wall.

To put things in perspective, Syrtis Major is a volcanic mountain, made from black volcanic basalt, covering over a million square kilometres and easily seen from Earth. In fact it's large, black mass was the first topological feature identified on Mars. Jezero Crater once contained a lake, with water inflowing from the North-West, and outflowing through a breach in the East-South-East. Where that water went may be the subject of future missions.

Perseverance has been examining the crater floor, testing its equipment, and is currently en-route to the silt fan, left by the water flowing into crater.