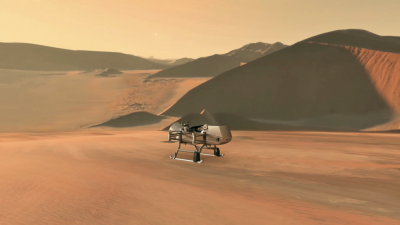 This illustration shows NASA’s Dragonfly rotorcraft-lander approaching a site on Saturn’s exotic moon, Titan. Taking advantage of Titan’s dense atmosphere and low gravity, Dragonfly will explore dozens of locations across the icy world, sampling and measuring the compositions of Titan's organic surface materials to characterize the habitability of Titan’s environment and investigate the progression of prebiotic chemistry. Credits: NASA/JHU-APL

Few worlds excite exoplanetary chemists like Titan, Saturn's enigmatic and largest moon. It is the second-largest moon in the solar system, and the only one known to have a dense atmosphere. As such, it is seen as an analogue to the early Earth, and therefore important in understanding how life might have evolved on our homeworld.

Dragonfly will launch in 2026 and arrive at its destination in 2034. What makes Dragonfly different speaks loudly of what makes Titan different. By taking advantage of the thick, dense atmosphere, Dragonfly will fly to dozens of different locations. Yup, fly. It's a rotorcraft, basically a kind of drone.

Titan has subsurface oceans and reservoirs of water, and at one time these were also on the surface. The complex chemistry required for life is available in (relative) abundance on this world.

Rovers take time to move from one place to the next, and generally stay within a limited area. Since Dragonfly can take to the air, it can range much further and do so with greater safety. The original landing site has been determined after scouring 13 years worth of Cassini data to find a safe, calm weather period to land, as well as a location. This will be in the “Shangri-La” dune fields in the equatorial zone, which resemble the linear dune fields of Namibia in southern Africa.

A quote from the NASA page dedicated to the Dragonfly announcement:

Dragonfly will explore this region in short flights, building up to a series of longer “leapfrog” flights of up to 5 miles (8 kilometers), stopping along the way to take samples from compelling areas with diverse geography. It will finally reach the Selk impact crater, where there is evidence of past liquid water, organics – the complex molecules that contain carbon, combined with hydrogen, oxygen, and nitrogen – and energy, which together make up the recipe for life. The lander will eventually fly more than 108 miles (175 kilometers) – nearly double the distance traveled to date by all the Mars rovers combined.

It's that last bit that has real significance. Over 100 miles, and twice the distance of all the rovers combined. In 2020, The Mars2020 Rover will arrive on Mars, and it will have a helicopter drone to scout the ground ahead and look for interesting places to visit. This sudden surge in aerial science is no accident of timing. Rovers can carry large science-package payloads, but their ability to move around, although far better than a static lander (obviously), has limitations. Drones and helicopters can extend range and versatility, but at the cost of having to leave a lot of mass behind.

Dragonfly will not be able to carry as large a science-package as a 4 ton rover, so it's a trade-off for versatility and range. Mars2020 has the best of both worlds - a large rover to carry the science-package, and a lightweight drone that will be used both for scouting safe routes and finding locations of interest that otherwise the rover might simply have rolled past.

The Mars2020 drone is a twin-propeller model, with both propellers on the overhead stem (one turning counter to the other to stop the helicopter from spinning). Dragonfly on the other hand, has a much more drone-like model, with two rotors at each corner to carry the above-normal weight of the package. The thick atmosphere helps here, offering more lift, while the low gravity mens the payload can be heavier than on Earth.

For more information on Dragonfly, visit NASA's Dragonfly Will Fly Around Titan Looking for Origins, Signs of Life at NASA.