blog:articles:general:astronomers_nightmare
« 7 Minutes of Terror
The Climax » 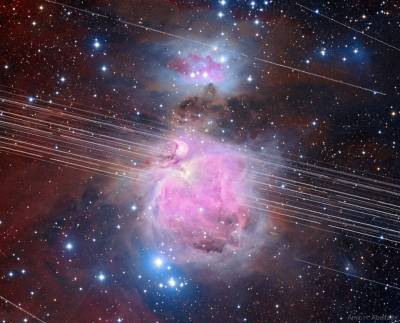 Satellites offer such huge benefits, including communications, taking the internet where it wouldn't otherwise be feasible, monitoring our weather and sea-level changes, GPS etc. etc. We shouldn't forget spying (um, military intelligence) either, because despite its sordid nature, it is important. At least, some people think so.

Every nation able to build and launch a satellite is doing that, and they usually are building one or more constellations of satellites for permanent white coverage (no blackout windows when cover is not available). Even if they can't build or launch, they can usually pay someone else who can do these things for them. A constellation may have more than thirty member satellites.

While this is great for general consumers of the services they provide, it's not so great for ground-based astronomy. The image to the right shows trails across a composite image of the Orion Nebula, and highlights just what a problem this is becoming.

To put this into perspective, it is usually only images that need to be taken just after sunset or just before sunrise, since this is when the highest number of satellites reflect light back to Earth, but even the International Space Station can ruin a good shot, and that might be visible at any time during the night (in fact, between 10PM and 2AM is often the best time to see it).

Ground-based telescopes use software to remove shimmer from the collected light. Shimmer (twinkling) is caused by the atmosphere, which is at different temperatures and densities at various altitudes. This is entirely unpredictable, and there are other factors to complicate things further, such as water vapour and dust. The software that makes the latest telescopes so powerful has become extremely sophisticated.

It might be that software can 'see' a satellite moving across an image, and be able to remove it. As a programmer I know that adding and removing things to/from an image can be achieved very simply with basic bit-manipulation, but I can also see how doing this with satellite trails is going to be fraught with problems.

Removing the trails is not enough though. For every frame in the series where you remove a satellite (or three), you must add another frame to supply the data you are replacing it with. In other words, exposures get longer. As with normal photography, extending the time you collect light creates its own problems.

The Hubble Space Telescope (HST) showed that not only could space-based telescopes be viable, but that they could be small and still pack a punch as great as the largest telescopes on Earth (and usually better). With a main mirror of 2.4m, HST was much larger than a 64“/1.62m home telescope (you'd have to grind your own mirror for that), but much smaller than most small observatory telescopes. Even better, it was operated remotely.

Since HST launched, a plethora of space telescopes have entered service, and some, like the Keppler Space Telescope, have completed their mission and retired. It is important to remember too, that HST was not the first telescope in space. Eight Orbiting Solar Observatories were launched (by NASA) between 1962 and 1975.

With the Gateway programme, NASA is returning to the Moon, which has long been argued as a favoured spot for large, ground-based telescopes. The lack of atmosphere provides all the advantages Hubble had, and the low gravity means telescope mirrors (which these days are made from fragments anyway, and not in a single piece) can be made larger. In addition, an orbit at a large distance from the Moon would provide good conditions for image stability without those pesky satellites.

If the weather (clouds, high winds) become too much of a problem, or satellites begin to disrupt ground-based astronomy, the move into orbit around the Earth, Moon or Sun is always on the table, as is a move to the Lunar surface itself. But all this comes at a huge cost. It will be a long time before a general move beyond Earth will happen.