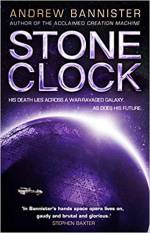 In the three main characters, Skarbo, Zeb and The Bird, we have the most likeable, complex and deep characters he’s created yet. Secondary and tertiary characters are well formed and suit their roles, and there are plenty of bit-part characters to amuse us and populate his diverse worlds.

The plot is engaging, always moving forwards, and there are enough twists in the final revelation to turn your brain inside out. Along the way there are entities to boggle your mind and political ideologies that will make your skin crawl.

The breadth and depth of his imagination is incredible. He’s created an entire artificial galaxy, given it character and taken us on a tour that is as exciting as it is varied., Iron Godsplugin-autotooltip__default plugin-autotooltip_bigIron Gods

Another novel of The Spin, and following on from Creation Machine, Iron Gods continues in much the same vein. There are intriguing and plausible characters, a spaceship AI that has had its lobotomy reversed, strange worlds and even stranger economic forces., Stone Clock