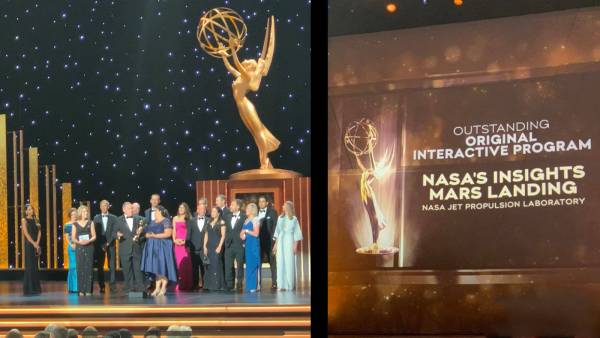 NASA recently won (14th-15th Sept 2019) two Emmy's for interactive content. Aside from the obvious achievements of winning the awards, there is something else going on here that should be recognised and encouraged. Awards, of course, are intended to recognise, encourage and promote excellence, but I'm talking about NASA not only reaching out to the public, but interactively engaging them.

NASA get up to all sorts of stuff, from launching satellites and preparing to send a crew to Mars, to examining the nature of the interstellar medium using spacecraft that are in-situ. It's not just science, it's engineering, exploration, design, architecture, construction, accounting (seriously important), communications, technology, education and a whole bunch of other stuff.

NASA eats up a lot of money from the public purse, so the public - in one way or another - should benefit from whatever they do. However, some of the stuff NASA gets up to, doesn't do this - it's pure science in the pursuit of knowledge which may or may not have social or commercial benefits. For example, knowing when and for how long the Martian Wet Epoch existed almost certainly won't have any tangible benefit (to the public) beyond education. Was Mars wet all year round, or did it only have liquid water during a part of the Martian year?

On Sept. 14, a team from NASA's Kennedy Space Center and SpaceX won in the category of Outstanding Interactive Program for multimedia coverage of Demonstration Mission 1, a test flight of the SpaceX Crew Dragon to the International Space Station - the first human-rated spacecraft to lift off from U.S. soil since the end of the Space Shuttle program in 2011.

The SpaceX Crew Dragon test flight was an exciting event, not least because it opened a whole new era of human exploration of space. The InSight coverage is an ongoing effort. The weather data on my own Mars Weatherplugin-autotooltip__default plugin-autotooltip_bigMars Weather Reports

This webpage will soon be converted to be the top level page for Mars Weather Reports. It will contain links to the sub-pages, the clocks, the current location of Mars graphic and other data not spcific to the weather readings. The sub-pages will display the weather data from Insight, Curiosity and Perseverance. page is based on (and adds further detail to) the InSight Mars Weather page maintained by NASA.

To most people, I imagine the Mars weather reports are a matter of idle curiosity. To me though, they are much more than that. The data records meteorological data, but hidden beneath all that data is the climatic data. Only by collecting meteorological data over an extended period of time can the climatic data be teased out. Meteorological data is relevant to only the place where the data is collected, but climatic data can be extrapolated to much more of the planetary surface. I'm writing a story about Mars, and I'm using the data to do real science in order to achieve a level of realism (or at least get my facts right) that I otherwise would find difficult.

By engaging the public, NASA are of course doing themselves a favour. It helps get funding if the public are excited about what they're up to. It also encourages the public, as they rise through the educational system, to choose career paths that may benefit NASA and the space industry in the future. The public are thirsty for knowledge, and feeding those that are interested in NASA's activities is definitely a good thing.

I've been following regular updates on the construction of the Mars 2020 Rover, which in turn has been informing me not only of the scientific instrumentation being carried, but how much they weigh, how big they are, and even how many people it takes to install them. When it arrives at Mars, it has a new landing system designed to pick the best spot possible, which in turn will pave the way for future landings in more difficult terrain. This is a key technology, and I covered it in an article entitled Landing the Mars 2020 Rover Safelyplugin-autotooltip__default plugin-autotooltip_bigLanding the Mars 2020 Rover Safely

Autonomous landings are always fraught with danger. One of the most dangerous terrains any landing might occur on is a boulder field. Not only would the impact of the landing on these hard objects be a threat, but the boulders are likely to be jagged too. Another threat are the steep cliffs of the crater - not falling off them (although that's a possibility), but crashing into them..

What NASA get up to, and how they go about it and the extreme lengths they have to take in order to increase the likelihood of a successful mission, isn't going to excite everyone. For those of us it does though, it does much more than feed our interest. It gives an insight into their world which is just as fascinating as what they do.

There is a cost involved with opening up their world. Websites are on servers that cost money, and someone has to post updates at regular and irregular intervals. The same goes for social media - someone has to do it. NASA produce a lot of educational material for schools too. Is it worth it? I'm not an American and I don't live in the USA, so it's not my tax dollars being spent, but I'd say yes. Space is a major concern for all sorts of commercial reasons, and in those terms it's on an exponential curve: it will become even more commercially important as time passes. You can re-read that last sentence replacing 'commercial' with 'political' and it still holds true.

Congratulations to NASA on winning the awards, and I hope it points the way to deeper engagement with the public in the future.