blog:articles:general:orbital_shenanigans
« Rules on Reviewing
How Big Is The Universe? » 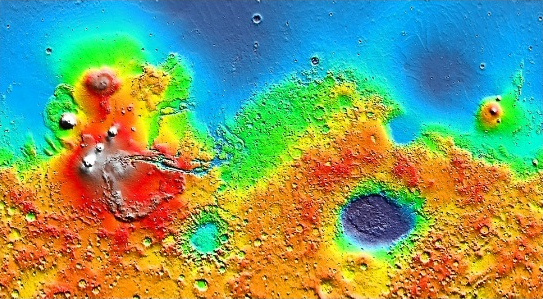 Sometimes when you do some research – actually, quite often – you find out some really interesting stuff and end up changing your mind. In my story, I had some people on the ground on Mars, and wanted a spacecraft in a geostationary orbit above them to give them communications between them at all times. Just for info, when talking about geostationary orbits, the accepted term for Mars is aerostationary. I’ll use geostationary and geosynchronous because it’s my blog and although the aero prefix is accepted, it isn’t mandatory.

I needed to calculate orbital characteristics for any orbit around any gravitational mass (because I write sci-fi stories), so I wrote this program because I'm a programmer and I'm too lazy to do it by hand all the time. The program has expanded over the last few years, sometimes from suggestions by other writers. I make it freely available and as simple to use as possible. It now has a list of functions as long as your arm (assuming you're not a tentacle user), and the numbe… (including around Mars), figuring out the orbital parameters is easy enough for me, but I decided to check my results against published scientific papers. I like to be thorough in my research. This resulted in a delightful piece of serendipity, which I’ll talk about in a moment, and turned up some fascinating facts about these peculiar types of orbit that I’d never heard of.

To begin, I should explain the difference between geostationary and geosynchronous. I’ll use Earth as an example to make the explanations easier. The International Space Station lies at an elevation of 250 miles. It completes an orbit once every 92 minutes. The further away from the planet the orbit, the less the gravitational influence, and so the orbital speed is reduced. So the satellite is moving slower, but the circumference of the orbit is getting bigger, hence the orbital period – the time to complete a single orbit – gets longer. Keep moving out, and eventually you reach a point where the period of the orbit equals one day. This equality is a geosynchronous orbit, because the period of the orbit and the rotation of the planet are synchronised.

In theory, this means you stay over the same point of land perpetually, but only if the orbit was equatorial. A polar orbit can also be geosynchronous. Subtle but important difference from geosynchronous.

So, why isn’t it simple? With Earth, there are various factors that affect the satellite. The Moon is one of the biggest influences – if it can affect tides on vast bodies of water even further away, it can affect a puny satellite. Venus may have a small effect at various times too, but the biggest factor turns out to be the Earth itself, because it’s not a perfectly smooth sphere. This means that gravity is not uniform all over the planet.

Imagine what that means to the poor old satellite. It’s at the perfect spot for gravity to create a perfect orbit, but as it passes over another spot, the gravity changes slightly and it’s suddenly not in that perfect spot anymore. Remember also that the Earth wobbles. This means that no satellite can maintain an orbit just by being there. All these influences wreck any chance that can happen, so the craft has to periodically adjust position by increasing speed (or decreasing it) to get back on station. The amount of speed required to maintain station is known as delta-v. For example, it may need 22 metres per second of delta-v per year to stay on station.

If you can calculate how much delta-v you need to maintain an orbit, you can plan on having enough fuel on board the craft to give it a decent service lifetime. The lower the delta-v, the more life your satellite has for a given amount of fuel. Since the variations in Earth’s gravity fields are the most significant factor, clever people with letters after their name did some research and found something rather interesting.

There are two points on the Earth where gravity is strongest, and they happen to be opposite each other – one on each side of the world. These two points they named the unstable points. Halfway between them, there were two matching points – again, opposite each other – known as the stable points. The stable points represent the lows in the gravity field. If you are at the right altitude for a geostationary orbit, and above one of these four points, your delta-v is going to be lower than anywhere else. If you are between any of these points, then the satellite will tend to drift toward the stable points, increasing delta-v.

It turns out that Mars has this issue too – two stable and two unstable points in the same configuration. Since the delta-v would be lowest at these points, and therefore less effort would be required to maintain station, they would be the go-to places for a geostationary Martian satellite. Mars is quite different from Earth. It doesn’t have a super-massive moon, for starters, and it’s also less spherical than Earth, but the basic issue of delta-v is the same.

As I just said, it is less spherical, but the gravitational anomalies are much bigger in comparison to Earth's. There is also the fact that since Mars is so much smaller, and that it is far less dense, the geostationary orbit is much closer to Mars. Closer means those gravitational anomalies have a bigger influence. Aside from the drift away from a stable point toward an unstable point - an east or west drift - there is also a tendency to drift northward which has to be countered.

Back to that delightful piece of serendipity I mentioned. It turned out that the people on the Martian surface were almost exactly on one of the unstable points. Yippee! Unfortunately, because of the wild variance in the Martian gravity field, maintaining station in a geostationary orbit around Mars turns out to be very difficult. It is simply too easy to begin sliding off-station. It would just be too much effort.

So, back to the drawing board. Let’s tackle this another way. Another orbit, what you might call a ‘regular’ orbit, doesn’t have this problem. At least, not so much. One suggestion was to use a lower orbit at an elevation of 5,000km. Consider that at the geostationary orbit (17,025km), the satellite can see 75 degrees of the planet either side of the point it is above. That’s a 150 degree spread. At 5,000km, this reduces to 107 degrees.

A 5,000km orbit has a period of approx 0.26 days (that’s Earth days, not Martian ones, which are about forty minutes longer). Using my orbital calculator, I finessed the orbit down to 4,697km. That gives it an orbital period of 6hrs 9mins and 13secs. If you do the sums in your head, you’ll see that four orbits come to approximately 24hrs 39 mins 53 secs – the same as a Martian day. So now we have exactly four orbits per day.

At any part of the planet the satellite can see means, from an observer's point of view from the ground, the satellite is above the horizon. At 4,697km the satellite can see 29% of the Martian surface, with a spread of 104.45 degrees. However, that is its visual footprint. It probably has a radio transceiver aboard to talk to objects/people on the ground, and that is very likely to have a much smaller radio footprint. On Earth, this is typically 60 degrees, and if our satellite had such a radio footprint, it would be high in the sky when radio contact could be established, reducing the ill-effects of mountains etc. casting radio shadows.

The satellite will be above the same point on the ground every 6hrs 9mins and 13secs. The radio footprint is 60 degrees. 60 degrees is exactly one sixth of a circle. This means a ground station will be in the radio footprint for approximately one hour. It will also be in in this footprint four times a day at exactly the same times each day.

One hour is a pretty decent amount of time to talk to an orbiting crew, and you get four chances a day. Contact, whilst not continuous, is actually pretty good, and the orbit will only require minimal boosting once every few weeks or so, perhaps less, and for a minimal amount of fuel. It may not be as glamorous as a geostationary orbit, but technically and logistically it’s an easier one, without sacrificing much communications ability.