A Keen Interest In Mars 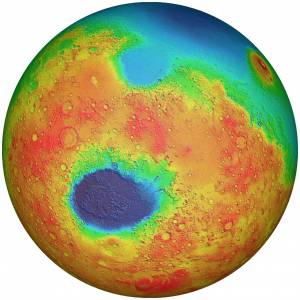 This webpage will soon be converted to be the top level page for Mars Weather Reports. It will contain links to the sub-pages, the clocks, the current location of Mars graphic and other data not spcific to the weather readings. The sub-pages will display the weather data from Insight, Curiosity and Perseverance. page, that I have a keen interest in Mars, Martian weather, and the InSight lander.

Mars itself, and the incredible science we are doing there is of course a fascination in and of itself. However, my interest goes deeper than that. My latest novel (at the time this article was written - March 2019) is about the exploration of Mars. NASA have provided a wealth of data and information for me to glut on, and I've tried to weave as much as I can into the story, without bogging the story down in detail. Tough call, but it's a fascinating place, and very definitely an alien world with very strange phenomena, so I figured I'd get away with it if I presented that information right.

However, the Insight lander, which landed on Mars in early 2019, has a special place in my heart.

Choosing a Location to Begin my Story

I wanted to create a base on Mars, from which people would venture out across the planet exploring and doing all that sciency stuff we expect. Choosing a location for that base wasn't easy - there are plenty of places to choose from - so I had to narrow things down. I created a set of criteria to help:

I eventually chose a site that fit the bill. Meanwhile, NASA had been going through a similar process to decide the best location for the InSight lander. One of the problems landers have is that once they are on the ground they don't move. Getting the location right is critical for their good operation and getting the maximum amount of science done. It turns out that NASA's criteria for InSight were almost exactly the same as my own, although for different reasons (they didn't need to build, but InSight would be drilling).

To my delight, they picked the same area as me - the south-west corner of Elysium Planitia. You don't get much better validation of your research than having NASA rubber-stamp it for you! 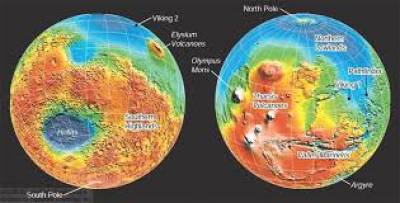 I did though, have one additional criteria that wasn't important to InSight: I needed to be close to a large body of water. Just a thousand kilometres from my proposed base is a large body of water-ice. The presence of this, so close to the equator, is obviously unusual. There could be as much as 32.4 trillion cubic metres of the stuff. In the normal run of things, this would have melted under direct sunlight and sublimed away. The reason it's still there is because it has been covered in an insulating layer of volcanic ash. Water is terribly useful - drinking, washing, cooking, laundry and perhaps even flushing the toilet. It's also good for making hydrazine, and can be used as a structural component in buildings, as well as a versatile heat-sink.

InSight landed approximately 150km from my proposed base, which is close enough to say the same place. Each day, InSight sends back a weather report, and by monitoring it I can figure out what sort of weather I can expect at my base. It's one thing to read an article that says “these are the seasonal variations in temperature”, it's quite another to get a daily maximum and minimum, wind speed and air pressure readings. Especially since they're in just the right place.

On his website, www.In-The-Sky.org, Dominic Ford has a page where you can see the positions of Earth and Mars relative to each other and the sun. Mars has a slightly elliptical orbit, and to be able to see how the weather reports relate to Mars' position in its orbit is very handy. InSight (and my base) are in the northern hemisphere, just a degree or so above the equator. The northern summer on Mars occurs when Mars is near Apogee - its furthest distance from the sun. Southern summers are much warmer than northern ones. 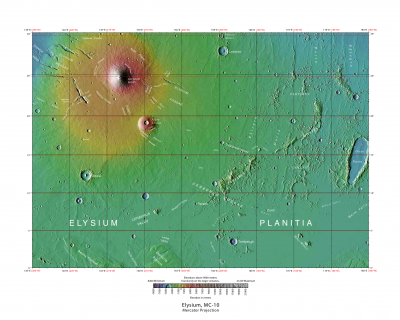 InSight landed in the south-western corner of Elysium Planitia. This is a low-lying area to the east of Terra Cimmeria, a high region whose border with Elysium is a three-kilometre high vertical cliff. The map to the right shows the quadrant. The colours represent changes in elevation.

USGS (United States Geological Survey) divides Mars into thirty quadrants (Elysium is #15), and these maps show extraordinary detail. The MOLA maps were created by JPL from the Mars Observer Laser Altimeter data (hence the name). The map itself is a composite of many images seamlessly stitched together, and then coloured according to the laser data. You can't see the large body of water-ice in the image, because it is at the same elevation as everything around it. 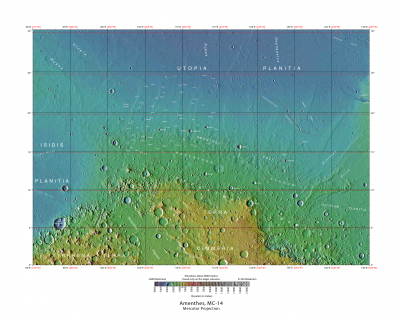 The Amenthes quadrant is the next map to the west (left) of the Elysium quadrant. You can see the drastic change in the terrain straight away. Those little speckles surrounding Terra Cimmeria are giant stepped mesas, up to 3km high, and (obviously) big enough to be visible from space. To the north is Utopia Planitia, where Viking 2 landed back in the 1970's. Utopia is the largest impact basin in the solar system. To the west is Isidis Planitia, where the ill-fated Beagle 2 landed. The great gouge running through Terra Cimmeria is an ancient river valley, culminating in a huge river delta.

To the west of Isidis is Syrtis Major. Syrtis Major was one of the first topographical features to be observed on Mars, and was believed at first to be a sea. It has had several names, including the Kaiser Sea and the Hourglass Sea, before its current name was adopted. It is in fact a volcano. It is one with a low relief - it rises around 6km up from Isidis, but the slope is gentle, at around one degree. It is vast, and covers almost a million square kilometres.

If you're wondering where the Tharsis volcanoes are, they're on the opposite side of the planet.

Mars is a fascinating place, and since 1996 the amount of data we've been receiving from satellites, landers and rovers has been overwhelming. Prior to that, we knew very little about our smaller neighbour. It is one third the size of Earth, and less dense, so only has a mass of 0.107 Earth masses. Surface gravity is 0.38 gee. Air density at the reference plane (the Martian equivalent of sea level) is 0.6% of the density on Earth. Atmospheric pressure is a mere 0.006% that of Earth. The mainly carbon-dioxide atmosphere (95%CO2) gives rise to blue sunsets. Dust-devils climb up to a kilometre into the sky. How can you not be intrigued by this place?