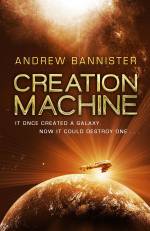 The breadth and depth of his imagination is incredible. He’s created an entire artificial galaxy, given it character and taken us on a tour that is as exciting as it is varied.

The characters are at once tangible and believable. They are people we can immediately invest in and care about – even the baddies. They inhabit a political landscape as varied as themselves, from corporate overlords and anarchic societies to feudalism at its most extreme.

The plot is simple enough, but unravelling it is anything but, and our intrepid heroes and antagonists alike fumble, plough and carve their way forward.

Throughout the story is a sense of humour that ranges through satirical, irreverent and cartoonish to a deliciously dark, morbid and often macabre sense of fun.

This is hugely entertaining reading that gets five stars from me, and highly recommended.

Another novel of The Spin, and following on from Creation Machine, Iron Gods continues in much the same vein. There are intriguing and plausible characters, a spaceship AI that has had its lobotomy reversed, strange worlds and even stranger economic forces., Stone Clockplugin-autotooltip__default plugin-autotooltip_bigStone Clock