blog:articles:science:nasa_technologies:smartsuit
« A Keen Interest In Mars
THE MOST Space Telescope » 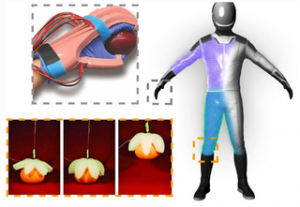 I think the title says it all, but just in case it wasn't crystal clear, this is what they have to say about it:

"The proposed SmartSuit spacesuit, while gas-pressurized, also incorporates soft-robotics technology that allows astronauts to be highly mobile and better interact with their surroundings."

The Smartsuit also incorporates a soft and stretchable self-healing skin which contains sensors that can visually display environmental and membrane structural information to the suit occupant.

Environment suits generally come in one or two basic types. The soft-suit, like the ones you often see in NASA footage of astronauts on spacewalks, bouncing around on the moon etc. Since the suits require around an atmosphere of pressure internally, and there is no atmosphere to speak of externally, it's a bit like wearing a balloon. The arms and legs want to straighten because of the internal pressure. To counter this, modern suits are made with the knees and elbows already crooked, so the occupant isn't always straining to keep their arms bent in just the right way. Soft-suits have the advantage they more or less collapse for stowing.

Hard-suits are like stepping into a suit of armour, and the joints have to be gimballed to allow free movement. They don't collapse, so each suit takes up a lot of space in the spacecraft, but offer good protection. They also mean you don't have to spend a couple of hours going through decompression in the airlock. They look good in movies, but I'm pretty sure they're pretty much universally hated by astronauts.

There is a third type, which so far exists only in science-fiction, called the skin-suit. Essentially this is an elastic material that is stretched over the body. The elasticity provides the pressure that stops the body from decompressing. Will we ever have anything like this? Probably, if we can find a material that doesn't lose its elasticity when exposed to the intense cold of the vacuum and is flexible enough to work in.

This is where the SmartSuit comes in. As you can see from the graphic, it looks pretty much like motorcycle leathers (replete with helmet!). It is still gas filled, and there'll be an undersuit to keep the occupant nice and toasty-warm in the sub-zero temperatures of Mars or wherever. It's looking much more like the suits Matt Damon worn in The Martian movie than anything an Apollo astronaut might have been in. Interestingly, it offers some mechanical counter-pressure (MCP) - which is exactly what the elasticity of the skin-suit is supposed to provide. This allows operating gas pressures inside the suit to be reduced.

Aside from anything else, the SmartSuit will grant the wearer enhanced mobility such that it'll make anyone stuck with a legacy balloon-suit insanely jealous. It'll be much lighter too.

We haven't even got to the good stuff yet. The suit will incorporate biomechanical assist technology, making it easier to grip things. The visual-feedback system isn't detailed, but could be something as mundane as an LCD display on the arm, or it could be more interesting, perhaps part of the suit changing colour to show where damage has occurred.

You can read more about this project on the NASA SmartSuit page.