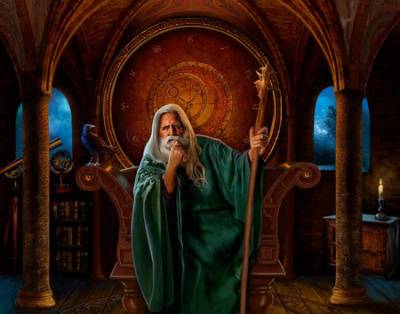 Prophecy is a common theme in fantasy, partly because it tugs on the strings that are entangled with mythos - somehow it just excites us - and partly because it is a huge convenience. Never underestimate the power of a single word. In all of writing, there are few words that are as powerful as Prophecy.

With this one word the author launches everything. All the antagonists take up their roles and positions (and often arms too), and the protagonists start squaring off against them. Not only do they take up positions, they start moving too, each playing their role to perfection.

Everyone has a purpose, a reason for being in the story: to serve the prophecy in one form or another. The stakes are laid bare and a cataclysmic ending is more than just hinted at. Dire futures exist if the prophecy comes to pass (or fails to), and a veritable golden age will begin if the prophecy is foiled (or made manifest). Battle lines are drawn up. There are usually three sides: the protagonists, the antagonists and those that don't want or care to pick a side. Sometimes this last group are entirely in the dark about the whole thing. Things are not just set up either: they're moving.

All this from a single word. Wow.

The third group, the ones who neither pro- nor antagonists, complicate things. To coin a bad phrase, they square the triangle. Sometimes the main players (pro- & antagonists) come at each other head-on, but usually they come at each other obliquely. This may be because they're not quite ready for a full frontal assault yet, but often it's because of the great white elephant in the room - the third group.

Let's give the third group a name so talking about them is easier: the proletariat, or prols for short. Moving amongst the prols without drawing attention is a common theme, although this can sometimes be because there are spies amongst them and there is no way to tell a spy from a prol. Another common issue is that acting 'in the open' will likely bring the authorities down upon the hapless heroes; authorities that believe things such as prophecy are no excuse for hacking someone up with a sword in a dark alley.

The prols are also a source of other confections for the author. Romantic liaisons for example. Also there are people who help out with things such as nursing the hero back to health after being severely wounded. Why? Because they're just decent people, and that's what they do. Either that or they have a little backstory to tell and an axe to grind with the people who injured the hero. This often leads to the hero gaining some information (or direction), so they know what to do next. Handy, huh?

The prols will by turn be a help, a hindrance and an obstacle. Not to mention a figurative cavalry when the hero's group desperately needs rescuing. Whatever the author needs them to be, in fact. Thanks to the prols, the story can head off in directions that would normally see the hero and her group slaughtered: the reader can see it going that way, even if the hero herself can't, so the tension and fear for the hero mounts. Then, when all seems lost, the author plays the prol card. Perhaps all they do is create a distraction, but its enough to save the story from ending 200 pages too soon.

With that one word, the author sets all this in motion. Each character in the story has a reason for being on the side they are, and the prophecy supplies that reason. There are many moving parts in a story, and a prophecy kicks all them into motion: the antagonists are racing to fulfil their destinies, and the protagonists are racing to stop them. And the prols muddy the waters and often make the story much more entertaining than it would otherwise have been; they certainly make the world richer.

Perhaps the trope of the Prophecy has been overused, but I don't think so. More likely, it has not been used well, or exploited for all the coin it could toss into the story. Next time you consider writing a prophecy story, think of triangles and prols, and give them as much thought as the protagonists, the antagonists and the prophecy itself.

Note: this article is mainly observational, and therefore is subjective. Agree or disagree, but if it makes you pause to think then it has done its work.

Helen Claire Gould, 2020/10/07 06:09
Interesting to see you've come up with a short version of proletariat (prols). Orwell used 'proles' for the same purpose in 1984. Other than that, what a fab article! I followed your train of thought (and agree with it) exactly. Prophecy is a useful tool. 💖

Phil Ide, 2020/10/07 13:12
I don't know why this occurred to me, but once it did I started digging into all the fantasy stories I'd read that involved prophecies, and found that it seemed to be true in every case (I'm sure there are some exceptions somewhere).

It's strange, the things we discover if we just look under the hood.