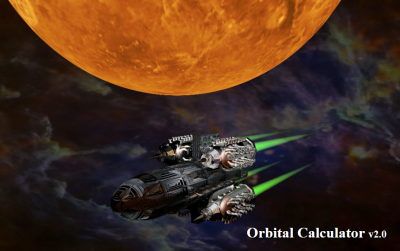 It's been a while in coming but it's finally here, with a packed feature list. It has increased precision and is generally a lot easier to use.

You can now perform two-body orbital calculations, so the masses of both a star and planet (or planet and moon) are taken into consideration. Time dilation can now be calculated either as a function of the speed of light or (in a much more mundane and realistic way) from an orbit. Orbital time-dilation takes into consideration gravitational dilation as well as dilation based on velocity.

Additional objects have been added to the default database (don't panic, you can import your old database), including the Alpha Centauri trinary (Alpha Centauri A, Alpha Centauri B and Proxima Centauri), Tabby's Star, Barnard's Star and Tau Ceti. Managing the database is much simpler now too.

Wherever possible, the calculate button has been removed. It only exists where it makes sense to collect all the data before performing the calculation. Copy to Clipboard is now available on most result screens to make life a little easier for you. There is even a context-sensitive help system filled with additional information.

As before, the program is portable, meaning it doesn't have to be installed. Just unzip the zip file into folder (any folder) and run the executable orbitcalc.exe. As a fully portable application, you can run it from a USB stick.

The Windows versions (32-bit and 64-bit) will be released ahead of the linux and Mac versions. If you have a need (or desire) to get your mitts on a version for these platforms, just leave a comment below (state PRIVATE MSG in the first line if you don't want the world to see it - I value your privacy).

I needed to calculate orbital characteristics for any orbit around any gravitational mass (because I write sci-fi stories), so I wrote this program because I'm a programmer and I'm too lazy to do it by hand all the time. The program has expanded over the last few years, sometimes from suggestions by other writers. I make it freely available and as simple to use as possible. It now has a list of functions as long as your arm (assuming you're not a tentacle user), and the numbe… page has been updated with new information and screenshots. You can jump to the Downloadsplugin-autotooltip__default plugin-autotooltip_bigDownloads

A full description and a list of the features are available page using the link in the top bar menu (may appear at the bottom of the page if you are on a phone).